Leo Sun, Maxx Chatsko, And Dan Caplinger
(TMFSunLion)
Warren Buffett’s Berkshire Hathaway recently cut its positions in several stocks, including IBM and Oracle. But Berkshire remains invested in dozens of other stocks, and some of them are still worthy buys for mainstream investors.Today, a trio of our Motley Fool contributors will highlight three of their favorite Buffett holdings: Costco (NASDAQ:COST), Apple (NASDAQ:AAPL), and Phillips 66 (NYSE:PSX).

An investor puts coins in a piggy bank.
IMAGE SOURCE: GETTY IMAGES.
The top name in warehouse retailers
Leo Sun (Costco): Berkshire held nearly $1 billion in Costco shares at the end of 2018. The warehouse retailer, which locks in shoppers and subsidizes its low prices with paid memberships, saw its shares rally about 90% over the past five years against the S&P 500’s 50% gain.
Costco’s membership-based business model, its wide selection of products, the strength of its private Kirkland brand, and its focus on big bulk purchases helped it keep Amazon.com at bay. Its adjusted comparable-store sales rose 6.7% during the second quarter, and its e-commerce revenue rose 26%. Its membership fee income rose 7.3%, fueled by price hikes, and it retained a renewal rate of 90.7% in the U.S. and 88.3% worldwide.
Those numbers indicate that Costco’s business model is sticky and has tremendous pricing power. That’s why analysts expect its revenue and earnings to rise 8% and 9%, respectively, this year. Costco’s stock admittedly doesn’t look cheap at 27 times forward earnings, and its forward yield of 1% doesn’t offer much downside protection. However, investors are willing to pay a premium for Costco for three key reasons.
First, like Amazon, it’s one of the few retailers that can charge shoppers subscription fees. Second, Costco plans to open 23 new warehouses this year, as many struggling retailers reduce their brick-and-mortar footprints. Third, Costco is a bear-market-friendly stock that withstood previous market downturns. That’s why Berkshire is accumulating shares of Costco, and why it will likely buy more.
Take a bite out of this stock
Dan Caplinger (Apple): This is Warren Buffett’s biggest holding, with the Oracle of Omaha owning almost $40 billion of the iDevice giant’s shares. Yet it’s also been one of Buffett’s most controversial holdings lately, because the stock price has taken a big hit, in the face of headwinds for its most popular products.
Apple has had to deal with slowdowns in growth with the latest models of its iPhone. Given the utility of older models, owners of iPhones haven’t upgraded their devices at the pace they did in the past. Owners holding on to old smartphones longer means less sales volume for Apple, and the company also has to deal with the fact that its premium devices are out of the reach of the typical consumer in many parts of the world, especially in emerging markets.
Skeptics believe that Apple can’t come up with innovative products to follow in the footsteps of the iPhone, and they’ve priced the stock accordingly. At 14 times trailing earnings, investors can buy shares of a mature company with the capacity to sustain profits — and even offer modest growth — for years to come. That’s far from a given in today’s risky market, and that makes this Buffett stock worth a closer look whether or not you use its smartphones.
North American refiners have a global advantage
Maxx Chatsko (Phillips 66): American shale oil is so abundant and cheap that it has changed global energy trade flows virtually overnight. It also has another important characteristic: Shale oil is very light and sweet. That’s industry jargon for “this stuff needs minimal refining.” It’s actually been a bit of a problem for the country’s refining infrastructure, which is tooled to handle heavier crude grades. 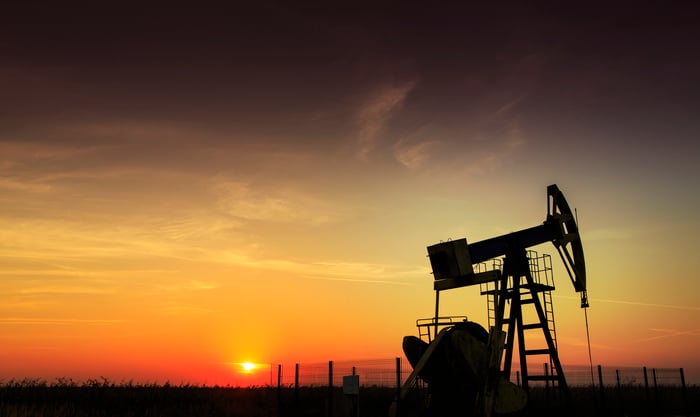 An shale oil pump at sunset.
IMAGE SOURCE: GETTY IMAGES.
While that’s created some bottlenecks for producers looking to move product (which has eased somewhat as more and more exporting infrastructure is built), refiners such as Phillips 66 have simply continued importing heavier crudes. Because it’s generally cheaper than all other varieties — much cheaper — it’s created an awesome arbitrage opportunity.
For example, while American crude oil has been priced at a roughly $10-per-barrel discount to the global benchmark called Brent crude in recent years, Canadian crude is currently priced at a $10-per-barrel discount to American crude oil. Heck, in November 2018, Canadian crude oil was trading hands for just over $11 per barrel. Total. The result: American refiners have benefited from extremely low raw material costs, but get to sell their refined products at global market prices and pocket the difference for eye-popping profits.
This trend was on full display when Phillips 66 reported fourth-quarter 2018 earnings. The company’s refining segment delivered over $2 billion in earnings, versus just $516 million in the year-ago period. Every other segment — chemicals, midstream, and marketing — grew quarterly earnings year over year as well.
Public backlash to trans-national pipelines that would allow Canada to export more of its crude to Asia means the United States should have first dibs on its neighbor’s heavy and cheap crude for the foreseeable future. That should keep Phillips 66 humming along while providing the opportunity to invest in domestic infrastructure, such as its burgeoning midstream and chemicals units.
Shares are trading at less than 9 times future earnings, 0.4 times sales, and just 8.5 times enterprise value to EBITDA. The stock pays a 3.3% dividend and is trading 20% below its 2018 peak — despite an aggressive share repurchase program that reduced the share count by a whopping 10% last year. Simply put, it might be Warren Buffett’s best play on the American energy revolution.
The stock investors are buzzing with excitement about – Get the details from The Motley Fool