Pictures of Notre-Dame Before the Fire: A Cathedral That Defined a City – The New York Times

When the architects of Cathedral of Notre-Dame set to work some 850 years ago, their goals were nothing if not ambitious.

The church’s sanctuary, they decreed, must be taller than any built before. The nave would rise 108 feet, and the two 223-feet-tall towers would cast a far-reaching shadow over the roofs of Paris.

The 12th century had just entered its second half, and to achieve new heights, the builders made early use of external supports known as flying buttresses.

The cathedral today is one of the most iconic images of Paris, second only, perhaps, to the Eiffel Tower. Around 13 million visitors tour the structure each year, and untold postcards bearing photos of its towers and its rose windows are sent back home.

On Monday, the world was again gazing at Notre-Dame — but now in horror, not awe.

The cathedral sits in the middle of the Seine river, on the Île de la Cité. It took more than 200 years to build, and was begun under King Louis VII.

History had a way of finding its ways through its doors.

In October 1793, amid the fervor of the French Revolution, antiroyalists forced their way into the cathedral’s Royal Gallery, and used ropes to pull down statues of what they thought were kings.

They were — just not the kings the revolutionaries thought. The statues depicted the old Kings of Judea.

But out they were dragged, anyway, into Cathedral Square, where they met the same fate as so many others during the revolution: the guillotine.

As it happens, it was Napoleon who ended up saving the cathedral. Decades later, in 1804, he was crowned emperor there.

Notre-Dame is one of Paris’s most famous landmarks, drawing more than 12 million visitors a year.CreditJean-Sebastien Evrard/Agence France-Presse — Getty Images

Work on the cathedral did not stop once it was completed. A laborer in about 1900.CreditImagno, via Getty Images

At play in the snow in December 1938.CreditKeystone-France, via Getty Images

American soldiers on the cathedral square on Aug. 25, 1944, when Paris was being liberated during World War II.CreditPierre Jahan/Roger Viollet, via Getty Images

Philippe Petit, the high-wire artist, between the towers in 1971.CreditAgence France-Presse — Getty Images

The cathedral is a jewel of medieval Gothic architecture.CreditDmitry Kostyukov for The New York Times 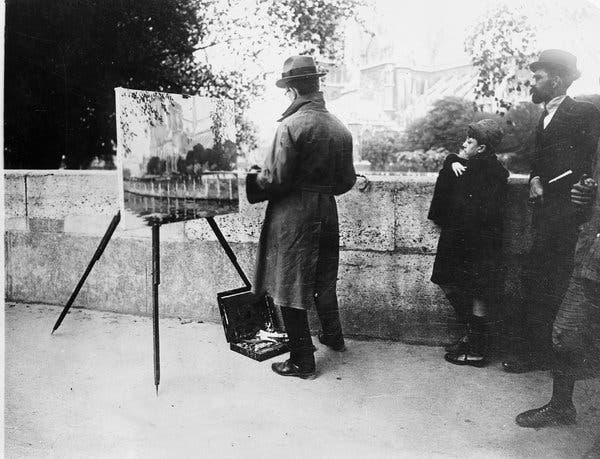 An artist painting Notre Dame in an undated photograph.CreditBettmann Archive, via Getty Images
The Seine seen from a tower of the cathedral in 1931.CreditThe Print Collector/Getty Images

A view of Notre Dame in 1922.CreditEugène Atget/Corbis, via Getty Images

via Pictures of Notre-Dame Before the Fire: A Cathedral That Defined a City – The New York Times