[Podcast] If you want to be rich and successful be like Spock PLUS the Law of Belief | RICH HABITS, POOR HABITS Podcast — Property UpdateProperty Update

If you want to be rich and successful be like Spock PLUS the Law of Belief | RICH HABITS, POOR HABITS Podcast

If you want to be rich and successful be like Spock.

If you’re a Star Trek fan, you’ll really enjoy that segment where Tom Corley and I discuss controlling emotions as being one of the rich habits.

And even if you aren’t, you’re going to get a lot of good information out of it.

Then, I’m going to teach you one of the lessons I learned many years ago.

It’s an extended mindset moment about the Law of Belief.

Once you understand the Law of Belief, you’re going to be much more in control of your life.

You’ll be able to develop some more rich habits and get rid of some poor habits.

For the few listeners out there who have never heard of Dr. Spock, he is the Vulcan in the Star Trek series, books, and movies.

Spock’s overriding character trait was that he never expressed emotion and, thus, was ruled by logic.

There is a great deal of new brain science out there that explains how emotions, in particular, negative emotions, alter brain performance.

One of the most profound impacts emotions have on the brain is that they interfere with the operations of the Prefrontal Cortex.

Why is that a problem?

It’s a problem because the Prefrontal Cortex does numerous things, some of which impact your ability to live a successful, happy, healthy and wealthy life:

When your emotions erupt, you have two choices – let them flow or shut them down.

When you allow your emotions to flow, the Amygdala, one of the primary emotional centers of the brain, takes complete control of the brain by shutting down or overpowering the Prefrontal Cortex.

There are millions of people around the world, sitting behind bars, all because they allowed their Amygdala to control their behaviours and decision-making.

So, controlling your emotions keeps you out of trouble?

Yes, but it is much more than that.

Controlling your emotions also happens to be critical to success, wealth, health and happiness.

When the Prefrontal Cortex is trained to control emotions, and this training becomes a habit, the Amygdala loses all power over you.

This allows you to intelligently and logically think through difficult situations, without any emotional interference.

Those who have trained themselves to be unemotional are able to tune out all negativity, no matter the source, and go on about their business.

Becoming successful is a process.

Part of that process is learning to Be Like Spock and control your emotions.

And, it’s a big part of that process.

The Law of Belief

Many years ago, I learned about the Law of Belief from Brian Tracy, one of my mentors.

The Law of Belief states that whatever you believe with emotion, becomes your reality.

The Law of Belief says that you don’t necessarily believe what you see, you see what you have already decided to believe. In other words, your beliefs control your reality.

You act in a manner consistent with your innermost beliefs and convictions.

It’s not hard to tell what anyone believes by simply looking at what they’re doing.

This is a foundational law in life.

That means that without wholeheartedly believing that something can actually be part of your reality, it will always remain out of your reach, no matter how desperately you want.

But the great thing about the Law of Belief is that it’s reversible.

Our beliefs are built on a mixture of facts and fictitious perspectives. 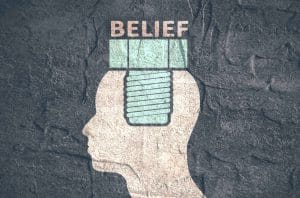 We learned the beliefs that we had when we were young.

Beliefs are nothing more than illusions of reality, and we’re all walking around with tinted glasses on.

The problem is that we don’t know we’re wearing tinted glasses.

Our self-limiting beliefs make up fundamental flaws in our psychology.

All the good property advice and information in the world won’t be enough if you’re sabotaging yourself with self-limiting beliefs.

But, if you engage in actions consistent with the beliefs you want to have about yourself and about your life, you can eventually develop the muscle – the beliefs – by lifting the right weights.

via [Podcast] If you want to be rich and successful be like Spock PLUS the Law of Belief | RICH HABITS, POOR HABITS Podcast — Property UpdateProperty Update