Putting COVID-19 into perspective – The history of pandemics [INFOGRAPHIC]

The COVID-19 pandemic is in its early stages so it is obviously impossible to predict its future impact.

It’s impact on our health, our economy and for those interested in property- how it will affect our property markets and the value of your and my house are still unknown.

Recently I explained the seven reasons why I’m confident in our property markets in the long term, in fact in the medium-term, despite the challenges the coronavirus is going to bring upon us.

But today I’d like to share two fantastic infographics published by Visual Capitalist that outline the history of some of the most deadly pandemics and help put the current pandemic into context.

A Timeline of Historical Pandemics

Disease and illnesses have plagued humanity since the earliest days.

However, Visual Capitalist explain that it was not until the marked shift to agrarian communities that the scale and spread of these diseases increased dramatically.

Widespread trade created new opportunities for human and animal interactions that sped up such epidemics.

Malaria, tuberculosis, leprosy, influenza, smallpox, and others first appeared during these early years.

Here are some of the major pandemics that have occurred over time:

Note: Many of the death toll numbers listed above are best estimates based on available research. Some, such as the Plague of Justinian, are subject to debate based on new evidence.

Despite the persistence of disease and pandemics throughout history, there’s one consistent trend over time – a gradual reduction in the death rate.

Healthcare improvements and understanding the factors that incubate pandemics have been powerful tools in mitigating their impact.

Scientists use a basic measure to track the infectiousness of a disease called the reproduction number — also known as R0 or “R naught.”

This number tells us how many susceptible people, on average, each sick person will in turn infect. 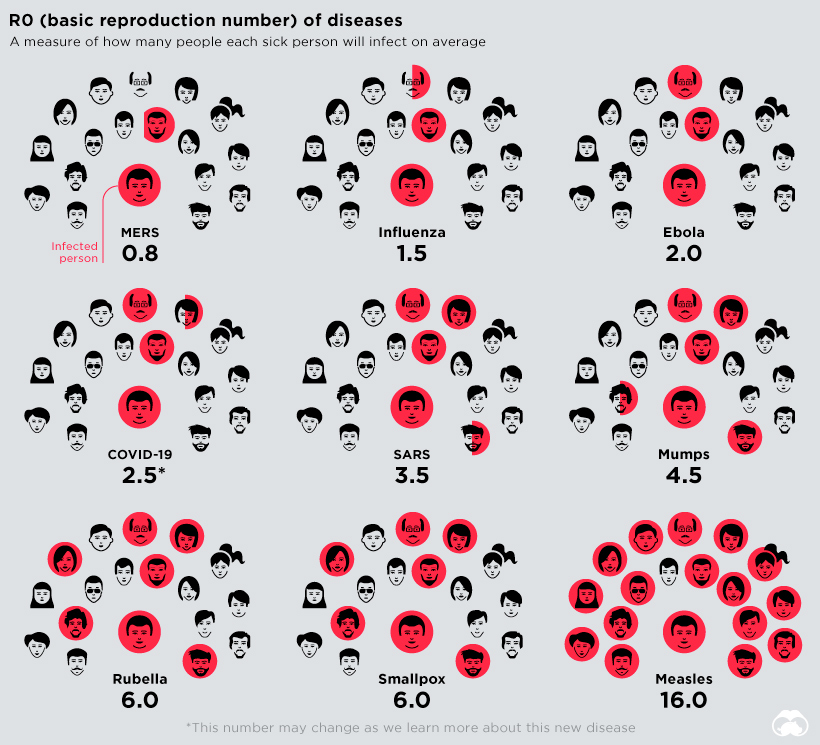 Measles tops the list, being the most contagious with a R0 range of 12-18.

This means a single person can infect, on average, 12 to 18 people in an unvaccinated population.

While measles may be the most virulent, vaccination efforts and herd immunity can curb its spread.

The more people are immune to a disease, the less likely it is to proliferate, making vaccinations critical to prevent the resurgence of known and treatable diseases.

It’s hard to calculate and forecast the true impact of COVID-19, as the outbreak is still ongoing and researchers are still learning about this new form of coronavirus.

As I said at the beginning of today’s blog, the COVID-19 pandemic is still at its early stages and so it’s really impossible to predict its full future impact, however I hope this post and infographic help provide you a historical context.

Home buyers and long term investors who have a secure job and income and pre approved finance should take advantage of any short term downturn in our property markets to set themselves up for the next phase of the property cycle.